It was an honour to read his poetry. 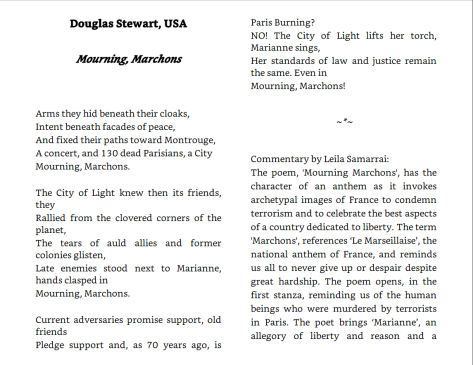 Arms they hid beneath their cloaks,
Intent beneath facades of peace, And fixed their paths toward Montrouge,
A concert, and 130 dead Parisians, a City
Mourning, Marchons.

The City of Light knew then its friends, they
Rallied from the clovered corners of the
planet, The tears of auld allies and former colonies
glisten,
Late enemies stood next to Marianne,
hands clasped in
Mourning, Marchons.

Current adversaries promise support, old
friends
Pledge support and, as 70 years ago, is
Paris Burning?
NO! The City of Light lifts her torch,
Marianne sings, Her standards of law and justice remain
the same. Even in
Mourning, Marchons!